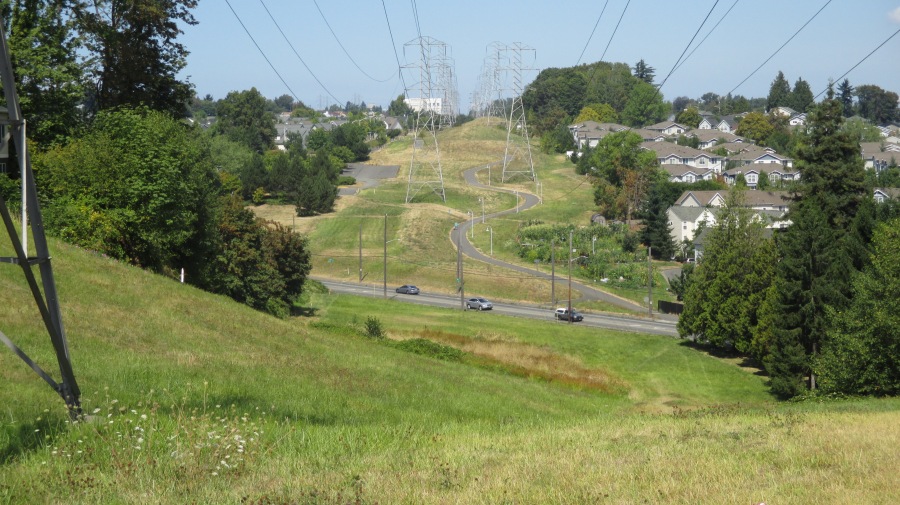 Remember Stephen Colbert’s thrilling 434-part series? This is just like that, only with Seattle area bicycle counters. Once upon a time I wrote about the Fremont Bridge bike counter at the Seattle Bike Blog. Now SDOT publishes data from nine bike counters, and the plan is to run through them one at a time, breaking down the trends and complaining about the poor quality of Seattle Open Data. Catch the previous installment here.

So. South Seattle. Sure, everybody knows that there’s a daily pelaton, no, a downright army of white guys in spandex bicycling across the Fremont Bridge and racing each other up Dexter Avenue. You’ve seen them, every day of the year, with their flashy lights, clippy shoes, and boutique waterproof messenger bags, pedaling from north end neighborhoods to downtown jobs. But what about parts of the city that are perhaps not as traditionally white and prosperous? Does Seattle’s bicycle culture extend there as well?

The Chief Sealth Trail opened in 2007 and runs through South Seattle, roughly from Beacon Hill to Rainier Beach, along a Seattle City Light right-of-way. According to the SDOT page, the trail was built primarily from recycled materials such as crushed concrete from the nearby Link Light Rail project, and there are unfunded future plans to connect the trail to downtown Seattle. Since 2014, an SDOT bicycle counter has recorded trips along the Chief Sealth Trail near South Thistle Street, which is on the southern-ish part of the trail.

Traffic safety in South Seattle seems to be a popular topic these days. Everybody has something to say about the Rainier Avenue road diet. Chief Sealth provides one opportunity for safe non-automobile travel in South Seattle. So how many people use it?

Two things bear mention before we get going: first, the name of the trail is in honor of Chief Seattle, a Duwamish chief from the 19th century and namesake of the city, and second, South Seattle has historically been home to non-white communities and people of modest income. I am preposterously unqualified to talk about the region’s treatment of indigenous people, and preposterously unqualified to talk about the socio-economic demographics of South Seattle. I am a white man and both live and work north of the Montlake Cut. If you are not a white man and have experience or commentary on bicycling in South Seattle we at Stats on the Street would love to hear from you! 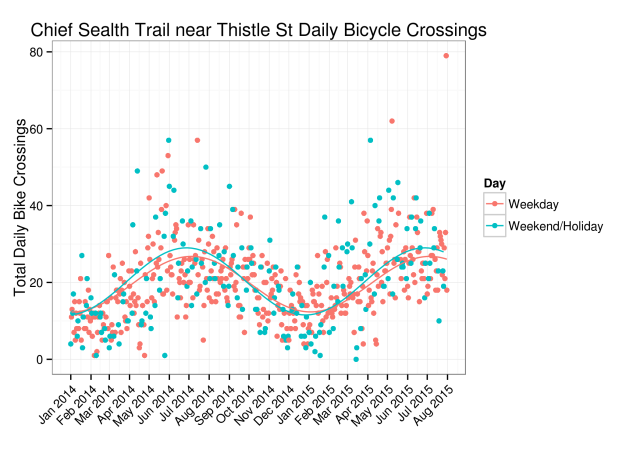 This is also fairly stark. The morning rush on a middle volume day may be two or three people per hour. On a slow day in the winter there may be no morning traffic at all. We barely even pick up the weekday commuter morning/evening bi-modal distribution. Alternately, if you prefer animals to statistics, the commuters are the bactrian camel and the weekend recreationists are the dromedary camel. Regardless, it’s not unusual at all to see daytime hours with no bicycle trips across the counter.

I actually removed one data point from the graph above. There was one hour that saw 60 bike trips — 58 north and 2 south — which is several times higher than other high-traffic hours. It happened on July 30, 2015 at 10PM. Anybody have any idea what that was? What would have involved a bunch of northbound bicycle trips on the Chief Sealth Trail later in the evening of Thursday July 30? UPDATE: This was probably a Point 83 ride.

Fans of this series will remember that we typically fit a regression model with total daily bike counts as a function of temperature, rain, daylight, and whether the day fell within Bike Month. The “Estimate” is the estimated effect of that variable on daily bicycle trips, and the “p-value” is an estimate of the probability that we would see an effect at least that extreme if there actually was no relationship, and can be informative if you believe that p-values are anything but a bunch of nonsense.

This all looks about right, just scaled way down for the low traffic of the Chief Sealth Trail. Each tenth of an inch of rain dropped off about one bicycle trip at S Thistle Street. The previous day’s echo effect of rain was “not statistically significant,” but I would guess that’s because the counts were just too small to see it. Interestingly there actually was a discernible weekday effect of Bike Month, with an additional seven crossings of the counter on average. For the low volumes of the Chief Sealth Trail this is pretty impressive! Bike Month didn’t change the weekend trips at all.

So, What’s the Deal?

Well, the Chief Sealth trail is hilly, winding, lacks amenities such as benches or restrooms, includes many road crossings where cross-traffic rarely yields, and doesn’t really connect pedestrian friendly places or employment centers. I am of the mindset that any path for people on foot and people on bikes is by definition cool, but this one certainly appeals to a limited audience. The steep hills make this a route for the fitties, but the fitties also probably don’t want to mess around with the winding alignment and frequent stops for cross-traffic. I can’t imagine this being the most efficient route from anywhere to anywhere. It’s pretty, and a nice diversion of open space and (relative) quiet within the city, but evidently just doesn’t attract many users. 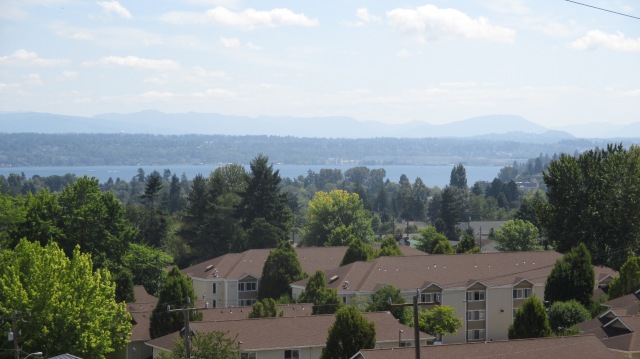 But What Does it Mean?

I mean, all we can really take from this data is that very few people bicycle along the Chief Sealth Trail near Thistle Street, although it wouldn’t be a stretch to suppose that very few people bicycle on the Chief Sealth Trail period. It may be that area bicycle traffic is simply much more diffuse in route selection, or uses nearby Beacon Avenue, or maybe people in the Rainier Valley often load bikes on the Link to short circuit the ride to downtown. It certainly doesn’t help that the trail sort of dead ends near Jefferson Park, and doesn’t easily connect to downtown. The Fremont Bridge from the preamble is a bit of an unfair comparison, because the Fremont Bridge is a choke point, caused by poor bicycle access across the ship canal in northwest Seattle. Nothing about the Chief Sealth Trail funnels bicycles from a large area, and in fact its meandering alignment might actively dissuade hurried commuters, while the steep hills probably dissuade anybody but the most fit people anyway.

The thorny side of this discussion, though, is diversity and inclusiveness in bicycling. I sometimes feel like this gets swept under the rug — that there are lots of old white guys in Lycra evangelizing for bicycle travel, but maybe the message doesn’t reach the general public. Again, if you are not a white man and bicycle frequently in South Seattle, Stats on the Street would love to hear from you. Check out this income map of Seattle from the FYI Guy Gene Balk at the Seattle Times (We have some upcoming projects about income distribution and inequality, but this is good for now):

That’s pretty stark. I’m sure the cynics are screaming “Correlation is not causation”, which is a fair point. As an aside, statistics doesn’t really help much with causality, outside of a randomized, double-blind clinical trial. At the risk of upsetting some stats hipsters/credible experts, there’s a field of causal inference (not to be confused with casual inference. I’ve got jokes!) but it’s mostly smoke and mirrors, and I think at the end of the day you either want external context or a randomized trial. For example, we know that rain causes fewer bicycle trips. That’s not a case of unexplained or coincidental correlation. Without external context really all we can say is that the Chief Sealth Trail sees very little bicycle traffic, and it happens to be located in a lower-income region of the city.

The main takeaway, however, is that there’s a beautiful, wide-open trail in South Seattle, just begging to be used. So if you can handle some hills and are looking for something to do after work or on the weekend, take a bicycle trip from Beacon Hill to Rainier Beach! 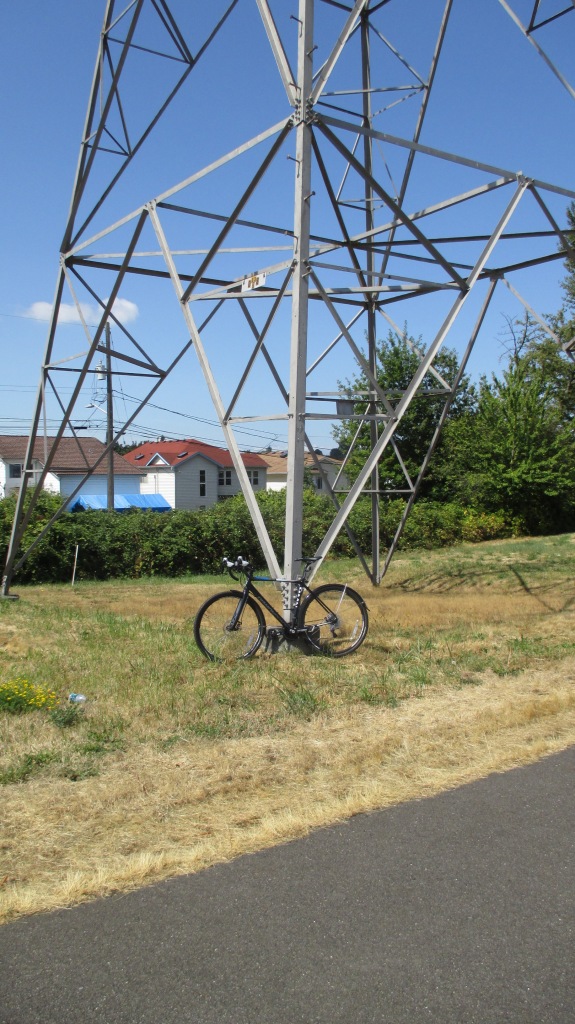