Water transects and surrounds Seattle. This is a city with bridges, and a city with ample maritime traffic, be it trawlers, barges, sailboats, yachts, kayaks, or even stand-up paddleboards. (Pro tip SUPers: don’t tackle the Montlake Cut during yachting hours, it goes poorly.) Tall freeway bridges arc over the Lake Washington Ship Canal, the Duwamish waterway, towering over tiny boats below, but many smaller bridges must open to accommodate marine traffic.

Last month Seattle Director of Transportation Scott Kubly announced plans to seek Coast Guard permission for limiting pleasure craft bridge openings. The Seattle Times story is here. The relevant SDOT page is here. Many commuters are probably familiar with the somewhat predictable 6pm opening of ship canal bridges: while federal law stipulates priority for maritime over vehicular traffic, openings are not allowed during commute times of 7-9am and 4-6pm. However, the evening commute is clearly still in force at 6pm, and so these openings predictably snarl traffic. Should a single, recreational sailboat be allowed to significantly disrupt the commute? I mean, it sounds kind of silly, hence the push to further restrict pleasure craft openings.

It might be helpful or just plain amusing to examine the current patterns of bridge openings. SDOT has a twitter account called SDOT Bridges, which sends tweets to announce the opening or closing of Seattle draw bridges. They look like this.

The excellent twitteR package in R allows downloading of up to 3200 most recent tweets, which we can use to examine the drawspan opening patterns from the last month or so. The following analysis comes with the caveat that the account “only posts boat openings btwn hours of 6am-10pm” according to a tweet posted on September 2, 2015. 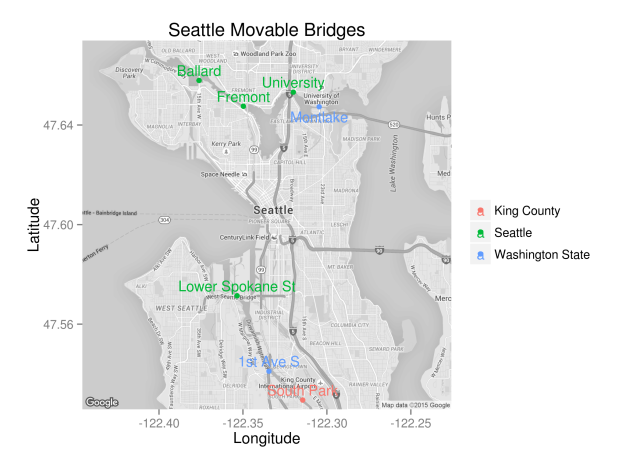 SDOT summarizes the bridges here.  Interestingly, they describe the Fremont Bridge as follows: “Just 30 feet above the water, the bridge rises for marine traffic on average of about 35 times a day, making it as one of the busiest bascule bridges in the world.” Most frequently opened drawspan seems like a strange superlative, like maybe the bridge wasn’t built tall enough, but its apparently notable status for openings should be familiar to anyone who regularly crosses between Fremont and Queen Anne (The Fremont Bridge bicycle counts will probably run the anchor leg of our Better Know a Bike Counter series).

While data on just drawspan openings doesn’t tell us the reason for the opening, it seems fairly uncontroversial to assert more industrial traffic though the Duwamish bridges, whereas ship canal traffic — especially through University and Montlake — should include many more pleasure craft: sailboats and yachts travelling between Lake Washington and Puget Sound via the Ballard Locks.

The graphic below shows average openings per day, roughly throughout the month of September 2015. We see that the geographic partition of ship canal vs Duwamish bridges is also seen in the frequency of openings. The South Park, 1st Ave S, and Lower Spokane St bridges were the three least frequently opened, and the Montlake, University, Ballard, and Fremont were the most frequently opened. The Duwamish bridges opened on average 2-3 times per day. The ship canal bridges showed more differences, with the Montlake Bridge opening the least and the Fremont Bridge opening the most. The openings posted to the SDOT Bridges Twitter account for the Fremont bridge were more like 10x per day than the 35x claimed by SDOT. I’m not sure if that is a vagary of the data, a seasonal effect, a mistake on my part, or what.

Because the SDOT Bridges account records opening and closing times, we can look at the distribution of opening duration. It looks like, while the ship canal bridges open more frequently, their openings prove more brief. All four ship canal bridges saw a median opening time around five minutes with almost all openings lasting not even ten minutes. In contrast, the Lower Spokane St bridge median opening duration was around 12 or 13 minutes, with 90% of openings lasting between 7 and 22 minutes. Perhaps something about being a swing bridge rather than drawbridge makes the openings last longer. This is also a route bypassed by most vehicular traffic in favor of the West Seattle Bridge. The South Park bridge openings were almost as brief as the ship canal bridge openings, with the 1st Ave S in the middle for the Duwamish bridges. 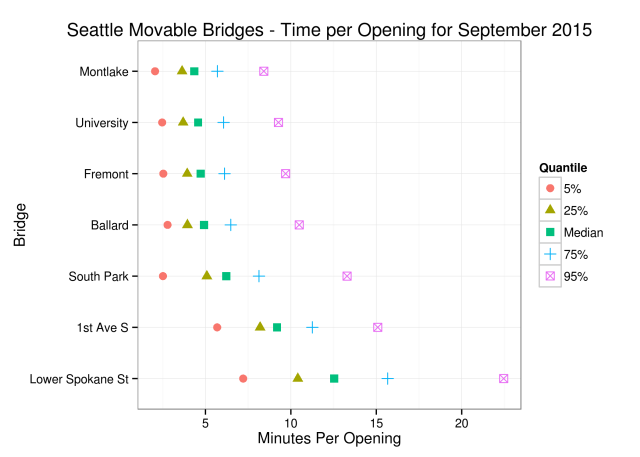 When do the bridges open?

Finally, we can look at the time of day at which the bridges opened. The graphic below clearly shows the 4pm to 6pm moratorium on weekday openings in the ship canal. It appears as though openings resumed at 6pm most notably at the Fremont and Ballard bridges. In fact, it appears as though there were more openings of those bridges between 6-7pm than any other hour of the day. The Montlake bridge saw the smallest relative bump at 6pm, although its busiest hour of the month was 7-8pm. The South Park and 1st Ave S bridges saw the most openings in the late morning/early afternoon, while the Lower Spokane St bridge opened more in the evening as well.

The high volume of bridge openings during times such as 9am and 6pm — that are clearly still part of the commute — would seem to suggest further restricting pleasure craft openings. Assuming the prioritization of person hours, it seems odd to value a handful of recreationists over hundreds or maybe even thousands of people trying to travel to and from work.